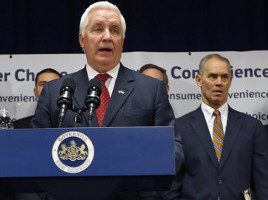 Governor Tom Corbett is at it again.

He told us cutting corporate taxes would create jobs. But after he gave corporations hundreds of millions in tax breaks, Pennsylvania’s unemployment rate went up.

He insisted that his backroom deal to outsource the State Lottery to a foreign corporation was legal, until Attorney General Kathleen Kane declared it unconstitutional.

In the most recent polling, 47% of Pennsylvanians disapprove of the job Governor Corbett is doing, because of his out-of-touch actions and attacks on working families.

Now he has a new scheme: to privatize sales of wine and spirits by dismantling a system that generates half-a-billion dollars a year for state taxpayers and turning it over to his corporate friends. Corbett’s scheme will risk the public safety of the citizens of Pennsylvania and hurt our families and communities by allowing an unlimited amount of outlets to sell alcohol.

Tom Corbett has said the reason our unemployment rate is so high is because workers are too. Yet, now he wants to throw another 5,000 Pennsylvanians on the unemployment line and create even more drinking problems by wildly putting alcohol on every corner with his reckless privatization scheme.

Contact your State Senator and tell them to reject Corbett’s latest scheme to help his corporate friends at our expense.

Tell them to support a common-sense alternative that keeps the profitable system that benefits all taxpayers but improves convenience and gives the wine and spirits shops greater pricing and purchasing flexibility.