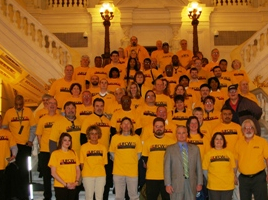 One of those opposed to House Bill 790 was the Malt Beverage Distributors Association (MBDA). The president of the MBDA, Mark Tanczos, claimed that the bill would steeply cut business for beer distributors. Although beer will be sold in more places, it will cost more for the consumer and there will be less of a selection because big retailers will only buy from the top-selling companies.

N.J. Cooper, President of Jacquins Liquor Company, pointed out that small liquor stores in the surrounding states are unclean and uninviting. They also have less selection and often do not ask for proof of age when making sales. Kevin O’Brien, the Vice President National Sales Manager of Jacquins Liquor Company, noted that the state makes $150 million a year by selling wine at Pennsylvania Liquor Control Board Stores (PLCB) and would not be able to make up that revenue if wine was sold in supermarkets.

Among those in favor of privatization included Craig Hoffman, Senior Vice President Wegman’s Pennsylvania Division and the Pennsylvania Restaurant and Lodging Association (PRLA).