E-Mail Your Senator And Ask Them To OPPOSE McIlhinney Proposal! 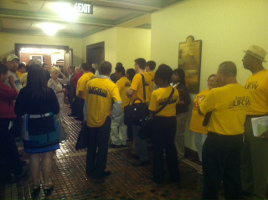 The media room at the Capitol was overflowing on Tuesday afternoon, with workers and other concerned individuals eager to hear Senator McIlhinney’s proposal for the Liquor Control Board.  At issue was whether the Senator had truly heard the voices of workers and small business owners, and of community groups and law enforcement during a series of public hearings over the past month.  The answer to that question was deeply disappointing.

Senator McIlhinney’s proposal still amounts to a pink slip for 5,000 employees of the Wine & Spirits stores.  It would create up to 14,000 outlets for alcohol sales, and it would cripple the profitable system of stores that are currently owned by the people of the Commonwealth of Pennsylvania.

By dismantling the existing system, rather than improving it, Senator McIlhinney’s plan sacrifices hundreds of millions of dollars in annual revenue, in exchange for a one-time windfall that does not come close to reflecting the value of what we already have.

“No matter how the Senator dresses this plan up, it would put 5,000 LCB employees out of work, hundreds of local beer distributors out of business and the 10,000 Pennsylvanians they employ out of work as well,” said UFCW 1776 President Wendell Young IV.  “Senator McIlhinney held three Committee hearings but he never asked one expert or one witness to look at his math.  He has kept this under wraps until the closing days of this budget season because he knows they just can’t stand up to scrutiny.”

Young urged senators to reject McIlhinney’s plan, and to support common sense modernization proposals that would allow the LCB to generate significant levels of new revenue and enhance customer convenience.

E-Mail Your Senator And Ask Them To OPPOSE McIlhinney Proposal!