Thanks To The Activism Of Workers Across The State, Governor’s Anti-Worker Agenda Is Derailed 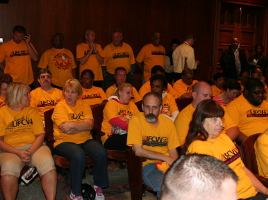 This year began with the Governor promising an onslaught of anti-worker legislation designed to drive down wages, privatize public institutions, and undermine retirement security.  Many of these initiatives came closer to passing than they ever have before.

With the members of the State House now home in their districts until September 23, it is time to declare that, for now, Pennsylvania workers have won on all of these issues!

Over the past several months, and particularly in the past week, we have been encouraging all of you to write and call your legislators in the House and Senate, to urge them to vote in the interest of working families in Pennsylvania, and the response has been overwhelming.

The many thousands of e-mails and phone calls that you made to your Senators and Representatives let them know that working families in Pennsylvania were watching their votes closely, and that you were invested in these fights.  Your calls and e-mails, tweets and Facebook shares complimented the hard work of union members and allies who were in Harrisburg every day, crowding the halls of the Capitol, filling committee meetings, or rallying on the Capitol steps.  You absolutely helped to kill these attacks on workers through your activism and vocal opposition.

These battles are not over.  We expect an even harder fight in the fall to prevent these and other attacks on workers from reaching the Governor’s desk.  But if we remain, as we have been, a united Labor Movement; if we reach out to our fellow workers and encourage them to raise their voices with ours; and if we visit our Representatives and Senators in their district offices over the summer, then we can continue to hold the line on these issues that are so vital to the lives of millions of Pennsylvanians.

Thank you for all you have done this year to stand up for and defend Pennsylvania’s working families; and congratulations for all you achieved!