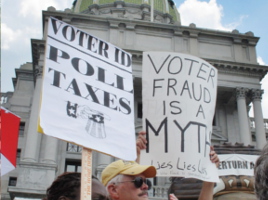 After more than 18 months of legal challenges, two trials, and a series of temporary injunctions, the Commonwealth Court today struck down Pennsylvania’s Voter ID law as unconstitutional.  While the Commonwealth may still appeal this ruling to the State Supreme Court, Judge McGinley’s decision is a significant victory for voting rights in Pennsylvania.

In his detailed opinion released this morning, Judge McGinley cited the over 1.3 million registered voters who may lack PennDOT ID, a figure first reported by the Pennsylvania AFL-CIO in the summer of 2012.  The State failed to adequately rebut even a more conservative expert estimate of slightly over 500,000 voters.  Of the State’s expert witness, the Judge wrote that he was not “competent as an expert and his opinions are given little weight.”

The Court seemed to give great consideration to barriers accessing an acceptable State ID, highlighting in the opinion the nearly half of Pennsylvania who are without Driver License Centers for at least five days per week.

The Court also slammed early “educational” efforts by the Commonwealth, stating “The statute imposes a duty upon [the State] to educate, not a duty upon electors to research.  [The State’s] position on “shared responsibility” rings hollow after [the State] fed misinformation to electors on numerous occasions.”

Judge McGinley ultimately wrote that “[The Voter ID Law is] invalid and unconstitutional on its face as the provision and issuance of compliant identification does not comport with liberal access and unreasonably burdens the right to vote.”

The Pennsylvania AFL-CIO applauds today’s decision, and we urge the Commonwealth to accept this ruling and abandon any remaining appeals.  It is time for the State to drop this attack on voting rights, and instead work on passing legislation to expand access to voting, through early voting, same-day registration, and no-excuse absentee ballots.