You are here: Home › Pennsylvania State Budget › Fight For A Fair Budget: Government That Works 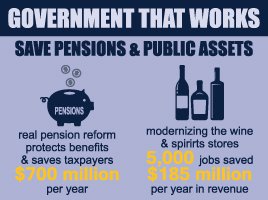 Governor Wolf explained that “it’s time to restore the public’s trust in our government by pushing for reforms and initiatives that increase openness and transparency.”  His administration has already taken great steps towards achieving those goals, and his budget proposal continues that commitment to solutions that work for taxpayers, rather than rewarding special interests. His budget implements pension reforms that work and that will save real money for taxpayers while protecting retirement security for workers.  It is the only plan that avoids repeating the mistakes that got us into this mess.  The unfunded liability in the system was created because politicians made a choice to stop paying their share.  That was a leadership crisis; one that we can’t afford to repeat, and it’s one that Governor Wolf is determined to fix.

Governor Wolf’s budget plan will produce savings to reduce our total long term liability by more than $10 billion.  He is proposing a $3 billion pension bond to help avoid the rapid increase in pension payments over the next several years.  This bond will not be funded by more tax dollars, but rather through modernization of Pennsylvania’s Wine and Spirits Stores, which is expected to generate an additional $185 million in revenue every year.

The Wine and Spirits stores are a profitable publicly-owned asset, supporting not only their own operating expenses but also producing revenue for the Commonwealth.  Pennsylvania’s Labor Unions and a majority of lawmakers in the General Assembly agree with Governor Wolf, that modernization of PA’s Wine and Spirits Stores is the answer.  Modernization would expand the number of Sunday stores and hours, allow more stores inside of or adjacent to grocery stores and family-owned Main Street beer distributors, allow for direct shipment of wine to consumers, allow the PLCB more flexibility in setting prices, and allow for the sale of lottery tickets in Wine and Spirits Stores.  These reforms would increase convenience, and are expected to generate $80 million in additional revenue in 2016-2017 alone.