You are here: Home › Elections & Politics › Pennsylvania AFL-CIO Joins In Celebrating The 50th Anniversary Of The Voting Rights Act And Calls Bipartisan Support For Election Reforms That Will Make It Easier For Pennsylvanians To Vote 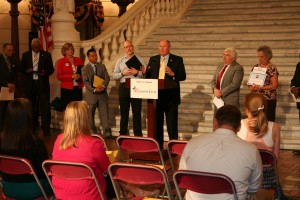 President Bloomingdale joined other representatives of Civil Rights and Election Reform Groups in a press conference at the State Capitol marking the 50th Anniversary of the Voting Rights Act and called for changes to make voting easier for Pennsylvania’s citizens.

President Bloomingdale described the passage of the Voting Rights Act an historic achievement in civil rights, progress for African Americans, and all voters, however, he joined with the other speakers in stating our work is far from complete. The Act needs to be updated by the Congress to ensure that bad politicians in states around the nation including Pennsylvania cannot pass unconstitutional restrictions that disenfranchise millions of voters and threaten the power of the people to decide who will lead them.

Bloomingdale described the passage of Pennsylvania’s voter ID law, which was one of the most restrictive in the nation, as an example of unpopular politicians trying to stay in power by denying voters rights. Pennsylvania’s Supreme Court ruled the law unconstitutional in 2014.   In another positive development the Texas Voter ID law was thrown out by the Federal District Court on August 5 the day before the press conference.

President Bloomingdale, on behalf of Secretary-Treasurer Frank Snyder, along with all of the other speakers at the Press Conference called for a New Era for Pennsylvania Voting Rights to make it easier for citizens to register and to vote. The New Era Reforms include: Congressional reauthorization of the Voting Rights Act in a manner that complies with U.S. Supreme Court rulings. In Pennsylvania we are calling on election officials and the legislature to employ modern elections systems which include Online Voter Registration, No-Excuse Absentee Ballots, Same Day voter registration, Early Voting, Automatic Registration and a Voters Bill of Rights among others which are already enjoyed by citizens in other states.