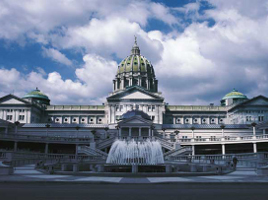 As Pennsylvania’s budget hearings progress, the General Assembly has and will continue to include significant discussion of the state’s two largest pension funds, the State Employee Retirement System (SERS) and the Public School Employee Retirement System (PSERS).  Understanding the state’s pension funding situation can be difficult and misleading on a normal day, but even more so during the intense nature of the Commonwealth’s budget hearings. So, here are some things you should know:

Public employees have always paid into the pension funds.  “Where we got in a problem . .  . was when politicians got involved”, stated House Appropriations Committee Chairman Markosek on Wednesday.  He went on to explain that the state’s decision to forgo contributing its full requirement to the funds is what led to the “unfunded liability”.

We have a plan; we just need to stick with it.  In 2010, Act 120, was passed to get the funds back on track.  This is a 24-year plan to bring the funds to 100% solvency with the appropriate contributions from the commonwealth and school districts.  Glen Grell, executive director of PSERS, emphasized repeatedly in his extensive testimony on Wednesday that Act 120 is working.

Pension reform bills do not solve the unfunded liability or state’s budget deficit.  Numerous bills have been proposed in recent years to reform the state’s pension system.  Many of them have focused on moving away from defined benefit plans – pensions – and toward defined contribution plans – similar to 401ks – for newly hired employees.  Unsurprisingly, these sorts of bills don’t make a dent in the unfunded liability.